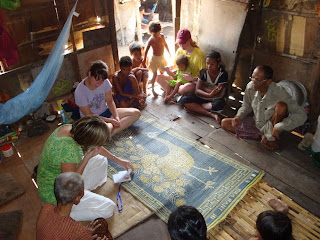 I’ve been frustrated for the last seven days that ‘aukun,’ thank you, is one of the only words I know in Khmer. But I’ve found that being equipped with ‘thank-you’ is better than nothing, and I am grateful that the Cambodians we’ve met so far are so forgiving. Today we find ourselves on the outskirts of Siem Reap, a major Cambodian tourist town thanks to the nearby temples of Angkor Wat.

In the small community we have just driven into, our 4wheel-drive truck is the the only vehicle in sight, and the pot holes in the road made the experience closer to ‘off roading’ than driving. There is a small ‘store’ where a woman sells packaged sweets and some rice, although she explains through a translator that even that will be hard soon since her homemade roof is falling in.

This impoverished community’s livelihood is the nearby trash dump, which boasts tourist hotel trash, and most ‘commerce’ revolves around this harsh economic reality.

A visit from outsiders is not often seen and calls for an invitation from the village head. We crawl up a ladder to a one room house set eight feet off the ground on stilts for when the rains come. As always we are accompanied by children we’ve never met and some interested onlookers. The person in charge turns out to be an ancient-looking woman who holds the card to the rice distribution system managed by our guide, Kerry's, NGO called New Hope Cambodia.

Every other week the village head goes to the rice distribution station and gets extra sacks of rice for everyone in her community.

Most of those who have been lucky enough to find employment in this community are men who have been drafted into the Cambodian army. They are absent for long stretches of time and are paid about $50 a month. Their wives stay within the community and raise the children, occasionally collecting usable items or food from the nearby trash dump to live. Almost no one has a roof, let along a steady income.

As we sit with the village head, Kerry tries to explain through her translator (a middle schooler who lives with her at the NGO base) that she is very sorry that they have not been able to fix the village well or sponsor any new families. A humanitarian organization put in a well about 6 months ago, but they did not dig deep enough, even though the villagers tried to explain how to get below the toxic upper layer of dirt, and now they have a new well that does not function so they’re still pulling dirty water from the old well. This is enough to make Kerry cry, since she feels that this community has depended on her and she has let them down.

The village head looks a little confused by this blatant display of emotion in a culture where everyone has PTSD from the Khmer Rouge era, and it seems that only babies are given cultural permission to cry. But she smiles at Kerry and says that they are very grateful for the rice distribution and that it is okay, they are just glad we are here.

After our meeting we donate mosquito nets for the entire village, and when a guy selling frozen pops walks by, we can’t help but buy enough for the local kids. We ask Kerry if next time she comes she’ll bring toothbrushes to combat the sugar. She says, of course.