Haiti: "Airline Ambassadors was the ONLY NGO today with a destination for its aid" 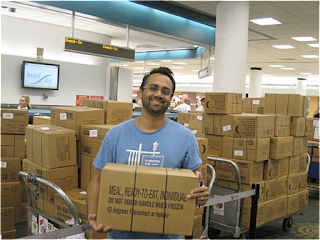 With the magnificent help of volunteers from Voices for Homeless we literally stuffed the entire plane with medical supplies and medicine. It was a lot of manual labor but we got EVERYTHING on the plane with the 60 Haitian-American doctors, surgeons and nurses.

We were told when in the sky that the runway at Port-au-Prince was filled with planes unable to move and were getting diverted. However, we had our paperwork, slot number and a lot of divine intervention and they cleared us for landing. The entire plane sang and prayed in Creole.

We touched down and played the role of baggage service unloading all the aid. We were the ONLY NGO today that had destinations for this aid and didn't leave it littered at the airport. Otherwise, as one worker told me, there is no organization and tons of aid is just lying at the edge of the airport with no home. They were very happy we didn't have that problem.

In addition, all other planes are C130s there. Pretty amazing we got three of our own to touch down today unscathed.

I made it work at the house for James and his crew of five doctors by moving myself and my team out to this run down but amazing place with the people. I will rendezvous with them in the morning. In the meantime, I will sleep and just clutch onto my passport, wallet and money listening to the beating drums, songs and prayers.

Everyone is sleeping in the streets, afraid to go into houses in case of more tremors. People are up all night singing and praying.

No rational adult should come here. Total destruction. Dead bodies laying on the streets where people are also sleeping. Tall buildings have collapsed except for the unoccupied homes that Aristide built.

We also started the process of buying fuel and a generator on the black market.

Having breakfast with Dr. Roger Jean Charles, our liaison here and will start walking through the medical facilities and passing out more aid. The doctors are coming with me and I will place the surgeons in under-served areas (Carrefour). I have gotten a driver and translator for the Oprah team who are in search of a woman who lost her home and family but still has her children and is living on the street. We already identified the place which I just visited. For Eric, I have identified drop zones and barren land whose landowners I have already met so he can begin planning his reconstruction project. All are very grateful.

The airport is now shut down for four days to commercial flights so am trying to make my way back to the DR but nobody has enough fuel.

Trying to go to sleep now where everyone is chanting "Jesus is God".

Add comment
Load more...
Newer Post Older Post Home
Subscribe to: Post Comments (Atom)
WELCOME to the AIRLINE AMBASSADORS INTERNATIONAL blog where members of our team of volunteers keep you up to date with their ongoing work. AAI is a non-profit organization that began as a network of airline employees using their travel privileges to help others. Since 1992 we have helped to restart the lives of more than 500,000 children across the planet. It is the only independent relief and development organization within the airline industry.