A Trip to Mirebalais 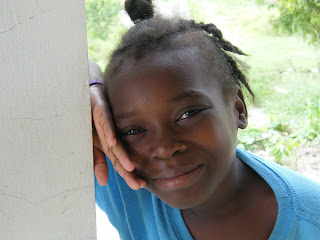 The prevailing poverty continues to overwhelm me each time I return to Haiti, and the last trip was no exception despite the few slight improvements made to the country's infrastructure.

There really is no way to prepare those traveling with me what to expect, as full realization of the chaos caused by the earthquake has to be encountered first hand. The poverty is too enormous, too widespread. New groups often get the feeling of: "Where do we begin?" It would be hard not to feel moved, frustrated, even futile.

The difficult journey north to Mirebalais gave everyone time to reflect on the severity of the situation. By the time we arrived at the Orphanage for God's Children the members of the group were naturally disposed to be captivated by the warmth of the children, demonstrating the effects of what a little kindness can do.

We set to work with purpose creating a virtual classroom. You can imagine the buzz of excitement and the collective curiosity generated by the forty individual laptops various AAI groups had donated. One of the older children commented that "Airline Ambassadors is taking us out of the stone age".

We spent the next day training Haitian teachers on the use of the computers, and suggesting ideas for a curriculum as well as setting up educational seminars for the children. Sue Hanna gave a stimulating biology lesson to kick off proceedings. The children were like little sponges, soaking in every detail. One child mentioned that he "didn't think my body was like animal bodies".

Education is clearly a crucial agenda for the development and future of Haiti.
Corey Aungst
AAI Mission Coordinator