People who never miss an opportunity to show affection for others 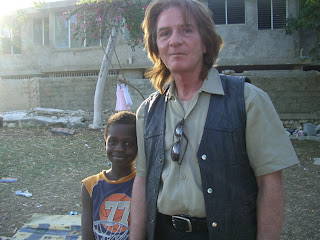 On my way to one of the orphanages I met Michael Brewer. He lost three homes and two kids in the earthquake. Here he is pictured with Richard, a very loving child who lost a leg under a collapsed wall. Michael has already arranged a prosthetic replacement for him.

Mike's a quiet man with few words who has been living in Haiti the last 10 years helping abandoned street kids with his organization "Haiti Street Kids Inc". He took us to Solino, a section of Port-au-Prince that houses the poorest of the poor. What immediately surprised me was that amidst the dirt and wretchedness people seemed genuinely happy. I guess when you have nothing, you have nothing to worry about. The search for material things in life seems to bring nothing but stress and unsought responsibility.

It was in Solino that I met Benjy Salomon. Mike had found him begging in the streets as a 6 year old and took him in. Benjy is now 21 and is always there to help me and watch my back whenever I'm Haiti. On my last visit he picked me up at the airport and gave me a big hug just resting his head on my chest for about 2 mins. He lives in a tent that is pristine and clean with twigs shaped into shelves to accommodate the little stuffed animals I have given him. He is one of the many street kids that Michael has given a chance to build a future for themselves.

Michael has done wonderful things in Haiti. He has been the victim of vicious slurs because he doesn't insert himself into the norm, simply getting down to the work at hand ignoring the pettiness and jealousies of some of the international community in Port-au-Prince.

It is thanks to Mike and his deep humanity that I have come to love the people of Haiti who, like him, never miss an opportunity to show affection for another human being.