What made me cry today... 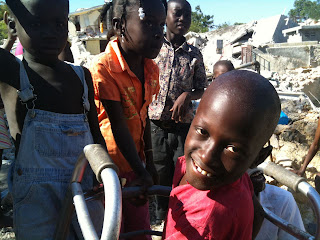 Today I met a young man by the name of Nixon pulling himself up the broken streets past the rubble of his school which collapsed and killed 4 of the teachers and 150 of his school-mates. Using a broken old walker and dragging his legs behind, he had a triumphant smile on his face.

I also saw graffitI on a wall downtown amid the ruins of everything: "MICHELLE OBAMA!"